Vows is music unlike anything on radio today.

The New Jersey based quartet founded by Jeff Pupa and James Hencken has slowly garnered a loyal following since the band’s debut album Winter’s Grave in 2012. A constant presence in clubs in their home state, as well as New York and Pennsylvania, Vows is widely known as a fans’ band, doing all recording, producing and show scheduling themselves.

Day jobs aside, Vows is a working band juggling the tour circuit while cutting two full length albums and a couple of EPs. Their most recent release in May consisted of two covers, one of which was Marissa Nadler’s “Silvia” which elicited a positive response in the form of Tweet of approval from Ms. Nadler. Just this month, Vows was nominated for artist of the month by Deli’s Magazine.

Don’t expect ripping guitar chords or thumping beats, Vows is meant to be absorbed while transfixed at the view from a high rise or watching the leaves fall on lazy Autumn day. The dreamy, almost soul searching side to alternative rock, Vows makes no apologies for their style – and not just musically. 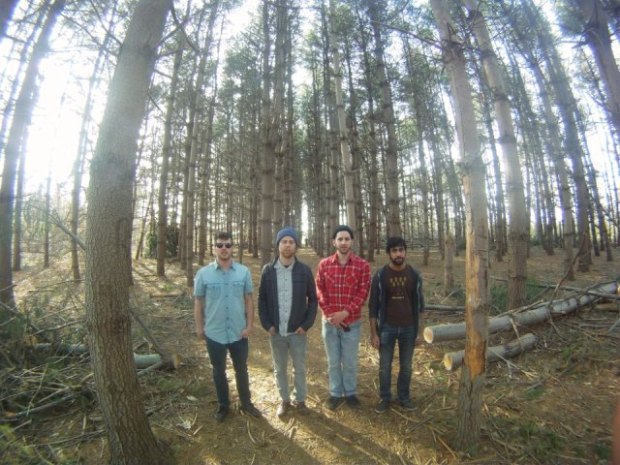 1. How did Vows get started and where did you come up with the name?

Jeff:  Vows started as an experiment for James and myself to stray away from playing the more folk / acoustic sound we had been doing for a while.  We just wanted a challenge to push ourselves to create a collection of songs that was synth and electric guitar-based, a bit more lucid.

2. Vows is described as indie, dreamy and a little bit of everything in between, was this intentional or did you gravitate towards this more drowsy genre?

James: It was certainly intentional to write more open ended songs that were still strictly structured. We wanted to open up the kind of instruments and sounds and noises and stuff we could fill songs with to reach a new emotional dimension kind of…but we’ve always been really into melody and song-writing. So its usually mostly about trying to write a well crafted song, and then whatever kind of sonic shape it takes on just sort of presents itself.

3. I hear what could be an almost modern approach to music of the 1940s – a nostalgic feel – like for example “Born a Wolf” a bit in style but also sound. First am I wrong, second if I’m right, is this the recording or do you guys have an affinity for older music?

James: Definitely, although it’s probably subconscious. I live in a house that was built in the 40s and I actually have a decades app that I always have on 40s music. Its definitely safe to say that we all have an affinity for older music, but we love tons of new stuff too. I just make what I want to hear, so the kind of stuff we love has definitely manifested itself in the whole process I’m sure.

4. I hear Vows in the next David Lynch project – are movies or TV shows something the band is open to?

Jeff:  This would be awesome, and thanks for that vision.  I’d love to see our music spread to more types of media, whether it be film or art or whatever.  I think it’s the type of sound that you can close your eyes to and hopefully it acts like a portal to bring your mind somewhere else.  I think film would only enhance that effect.

Sabeel: I’ve always liked the idea of doing a score for a movie, especially since it can have a major influence on the overall impact without people even realizing how much the music is affecting them. Of course, it would be cool to have one of our actual songs featured in a show or movie, but the idea of writing a piece solely to accompany the visuals is interesting to me.

5. How does the band approach the writing process?

Jeff:  We’ve always taken a separatist approach to our writing.  We all like the comfort / efficiency of writing in our own home studios.  That said, we exchange the majority of our recording ideas back and forth online.  We live in different states right now, and Sabeel, James, and myself are constantly writing and sharing recordings to add up and build on.

Sabeel: I think we would prefer to be able to spend more time writing in person, and it’s something that we’re striving for moving forward, but at the end of the day we’ll always end up writing on our own too. The convenience of digital recording lets you jot down an idea as soon as it hits you. Coupled with file sharing you can have a song fully arranged really quickly with everyone recording at their own convenience– whether it’s early morning or the middle of the night.

6. For a small band like Vows, do you find audiences prefer and appreciate original material even though it might not be familiar or is there a need to mix in well-known covers?

Jeff:  We did a cover of Marissa Nadler’s “Silvia”, which she actually approved and commented on on Twitter – that was a huge highlight for us.  We also did Status Quo’s “Pictures Of Matchstick Men”.  The two are paired as our latest release, and we really only tossed the idea of covers around before that halfheartedly.

Covers are hard to do, in my mind, because from a writing standpoint, I feel like you have to be adding something to it to really make it worthwhile. I think audiences can appreciate the covers a band does if they can hear those influences in their original sound.  There’s no need to attempt something you can’t do well in the hopes it gains some attention.  I’m not against covers, I am just more intrigued when bands stick to their guns and put their own material out first.

Sabeel: I’ve never really considered the thought of doing covers live as Vows mainly because we’ve always been so critical of getting our originals sounding good as a full band that devoting time to rehearsing anything else seems impossible right now. At the shows we’re used to playing I don’t think people expect to hear covers and honestly if a band plays a cover that’s a total outlier from their own set it almost seems like a cheap move to me. If it’s a well known song it’s more interesting to me to integrate your own sonic elements to make the song your own, while keeping the melody/lyrics in tact. But that’s just me…

7. You describe yourselves as a Do-It-Yourself type of band, do you still hire a producer do be a second ear and help provide direction?

Jeff:  At the moment, we are pretty die-hard with the way we record.  We’ve never had a producer or a second ear really – the most help we had was on our second album, Stranger Things, where we tracked drums and bass in a friend’s studio.  I personally don’t welcome the idea of a producer with open arms, and I also think that James, Sabs, and myself may be the only 3 people in the universe who can put up with each other when it comes to writing – just because we are so used to it.  It would just have to be a really good fit is all.

Sabeel: I think there’s a certain amount of trust that’s required between an artist and a producer for it to be fruitful. The same way two musicians need to have good chemistry– it’s the same with a producer. They’re just as integral to a great record as the musicians. For that reason, an album could gain interest in my mind solely because it’s done by a producer that I really respect (of which there are plenty).

But for Vows specifically we would only feel comfortable working with someone who understands what we’re going for, and there are plenty of producers who could grasp that just from listening to our albums. So when that opportunity arises I know it can benefit us hugely, but for now we’ll keep refining our own production techniques, which will ultimately help us convey our ideas better to a real producer.

8. Tomorrow a major label calls, do you negotiate terms or would you just be happy with a record contract and dump the DIY approach?

Jeff:  If a major label called tomorrow that allowed a good amount of freedom in the creative process and input from our end, then yea, I’d definitely sign up.  I think that concept is important to retaining what we’ve become throughout the years, but it’s also what we’ve been working / hoping for.  In other words, I wouldn’t want to sign to a label and just become something else because of that.  We already have some solid releases under our belt, and I wouldn’t want to let that disappear.  Captured Tracks, Sub Pop, Carpark records – something like that would be awesome.

Sabeel: Probably someone like the Flaming Lips, because they seem to have maintained the enthusiasm and creative spark that’s waned for a lot of bands that have been around as long.

James: Definitely the Flaming Lips yeah – I think we always shoot for putting on these big, epic shows, we’ve just been so limited by like equipment and venues. But our dream goal is probably to one day put on a huge, but heart-felt show the way the Lips do. So yeah playing with them would be amazing.

10. Now how does that work? Is it relentless calling from you to a major band’s label or would you get a call from a manager asking if you wanted to embark as an opening act for a major tour or something else entirely different?

James: No idea honestly. I’ve been at huge concerts where the tour openers were no-bodies and not very good.. Then others where the openers blew me away. I think you have to know someone or something. That’s one kind of thing I’d like a label for – to be taken more seriously as a capable show rather than a bunch of unorganized dudes that bigger promoters don’t know if they can count on. Or because if it does take relentless calling, we’re just not doing that, you know?

11. Finally, you juggle day jobs what’s it going to take for Vows to become full-time?

Jeff:  I mean, the day job thing is just part of our reality.  I don’t know if we are the type of band that just throws everything aside and jumps into a vehicle and tours.  As much as that’d be amazing, it takes quite a bit of sacrifice in other spectrums.  We’re definitely the most calculated project that I personally know, but that shows in our writing as well.  I think we’re more focused on setting this whole thing up for the long-haul, in the hopes it becomes the day job.

Sabeel: Ultimately, it’s going to require us being able to support ourselves with our music. The archetypal band model seems to be that you scrape by for years, paying your dues before you reach that point of living comfortably as a musician, while having to sacrifice a lot for it initially.

These days, while bands seem to be making less money through record sales, their popularity can escalate so much quicker than it would have in the past, to the point where they’re doing international tours after releasing one record. I’m not saying that’s what we’re expecting but at the moment we’re just building momentum and growing this project until it seems realistic to completely shift gears in our lives.

One thought on “Recent Interview”

Come Over My Way // Be You Again

It’s so nice to be you again.

Nominated for The Deli Magazines Artist of The Month